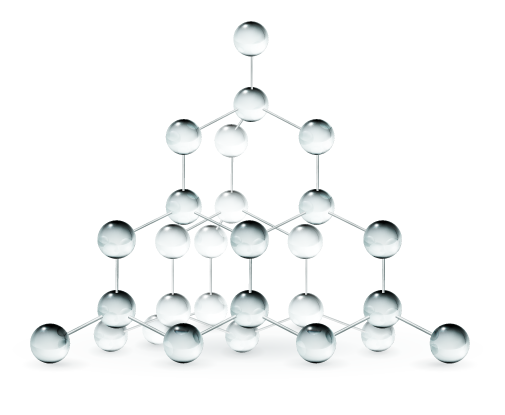 Nanodiamonds are one of the most advanced carbon materials in the world.
Diamonds are renowned for their superlative physical qualities such as the highest hardness on earth, superior thermal conductivity to any bulk material, and the high refractive index and abbe number. Nanodiamonds are not only small-sized diamonds with the above features but they also could generate other functions owing to their nano size, various functional groups, high dispersibility, ζ potential, and amorphous carbon.

Nanodiamonds are produced by a detonation method and the diamonds synthesized are extremely tiny particles with average diameter between 4~6nm. The particles are almost spherical (precisely, polyhedron) unlike abrasive diamonds for lapping, horning and polishing. Because of the size and the shape, a specific surface area of a nanodiamond particle is over 300m2/g.

Nanodiamonds can be a game-changing material of the future for those applications, with many products, and potential uses.

The oxygenic functional groups have a high affinity for water and polar organic solvents. On the other hand, they don't have any affinity for oil or nonpolar solvents. Nanodiamonds agglomerate immediately in such media.

Daicel can offer solutions to the problem. Surface chemistries are controllable because of Daicel's organic chemical technology, which makes it possible to realize a rich selection of organic solvent dispersions of nanodiamonds.

The line-up of nanodiamonds will be beneficial to users who hope to mix, disperse in raw materials such as plastics, oils, rubber, metal and others.

Nanodiamonds have ζ potential in dispersions.
The scientific technical term for colloidal dispersion means an electric potential of dispersed particles.
The ζ potential disperses nanodiamonds uniformly and stables in water and some organic polar solvents.

The nanodiamond particle is remarkably small, 4~6nm(four to six billionths of one meter).
The particle size is 20 times smaller than a virus. It is invisible to the naked eye.
A nanodiamond is the smallest diamond but an authentic one.

There are about 900 quadrillion particles (9×1017) in 1 carat of nanodiamonds.
In cases where surface activity is key to a function, the astronomical particle numbers (and also specific surface area) of monodispersed particles can be beneficial.

One of the greatest properties of nanomaterials is their specific surface area.
Nanodiamonds have far larger surface areas than larger diamonds of equal mass.
When mono-dispersed nanodiamonds are used for applications where it is important to have contact with surrounding materials and create vast interfaces, functions can be maximized.

One of most typical use of diamonds is abrasives. Nanodiamonds can polish objects and planarize atomically. Furthermore, chemical modification is also conducted by the tiny particles. Friction with nanodiamonds has oxidizability to some materials such as metals and ceramics.

Various chemicals (e.g.fluorescently labeled drugs, medicines, antibodies) can be attached onto nanodiamonds. Many researchers report that nanodiamonds work as drug delivery carriers with high safety to a living body because of the almost spherical shape of nanodiamonds.

Insulators such as plastics and rubber could be turned into electrical conductors by dispersing nanodiamonds into them. (Tunnel effect)

Nanodiamonds are produced from explosives by detonation method followed by purification and dispersion processes as below. Daicel Corporation has installed a semicommercial facility for detonation process in our Harima Plant (Hyogo, Japan).
A Diamond structure is formed from carbon atoms in explosives(a mixture of TNT and RDX ) at very high temperature and pressure by detonation in a closed chamber.
Nanodiamonds are originally obtained as aggregates. It is expected that diamond properties will be more prominently expressed when the aggregates are further disintegrated into primary particles. Daicel has developed the single digit nanodiamonds(SDND).

For those who are interested in finding new applications of nanodiamonds aside from those mentioned, free DINNOVARE samples are available by giving feedback of outcomes to Daicel.